Just before finishing work the other day, what should make it's way to my desk by a Spanish edition of Wormwood Gentleman Corpse volume 01! Yep, it's now in Spain...and probably a few other places to. It's now officially the most successful thing I've both written and drawn, with a bunch of international editions, ( French edition from Delcourt out soooon ) multiple English edition printings and even some movement on other media fronts...

Not only that, but the second collected volume, "It Only Hurts When I Pee" came out last week and also found itself on my desk. So if you don't see it in your store, go ask why! And if you still can't seem to find it, there's always the IDW Store here, for all your Wormwood needs. 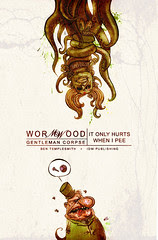