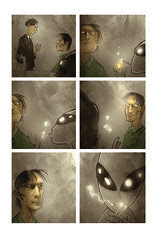 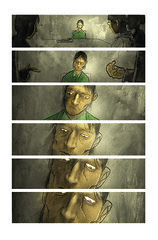 A couple of "quiet" pages from Groom Lake issue 2.

Coming to a good comic store near you shortly...

If you missed the first one & still want it, ( it sold out at distributor level awhile ago ) you may still be able to get a copy at the IDW online store here.

Issue 2, as is the way with comics, is a smaller print run and usually isn't enough to meet demand so if you see it, get it quick or get your retailer to get some more in before they're gone too.
Posted by Templesmith at 2:31 pm 3 comments: 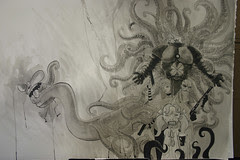 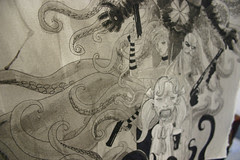 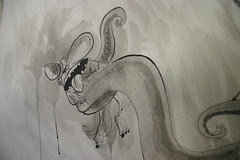 Some shots of the wrap around cover in progress...just laid down some washes on it at this stage.
Posted by Templesmith at 2:35 pm 1 comment: 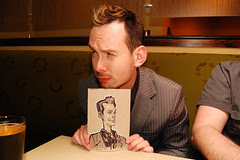 Photo by J. Etheridge, portrait by...I do believe, the magnificent Dan Panosian. I wish I looked as good as how he drew me. This is from Orlando, where I was last weekend.

Not to mention all the fans who came out to see me during the day to get stuff signed. HUGE thanks to all you guys.
Posted by Templesmith at 2:13 pm No comments:

Wormwood: It Only Hurts When I Pee French Edition 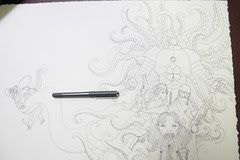 A little something specifically being done up for the French edition of Wormwood Volume 02 ( It Only Hurts When I Pee ) coming from Delcourt sometime soon. I love doing different covers for the French editions, since they're always done up in the French format of hardcover albums. Delcourt really give me a lot of support over there. Cannot thank them enough.

Sadly volumes 01 and 02 seem to be sold out from Amazon right now. Both will probably get new printings soonish since they're almost sold out at distributor level too, but volume 03 ( Calamari Rising ) is still available here. The hardcover of volume 01 is also near gone, though Amazon still appears to have a copies. If you spy one at your retailer, there may not be any more of them for awhile!
Posted by Templesmith at 2:05 pm No comments:

Here's a little work in progress on a Groom Lake #4 cover. See more on my flickr.

From Friday and thru the weekend I'll be down at the FX Orlando con thingy. So if you're a local, come see one of my rare appearances anywhere vaguely on the east coast, certainly the closest I'll probably come to visiting the true south. ( Is Florida actually considered part of the southern states? I have no idea! )

I'll hopefully have plenty of time to actually get some commissions done, ( Which I only really can find the time for at cons sadly ) so if you want one, drop on by. I should have some books, original art & maybe some prints available too.

Here's what I usually do for commissions:

All are painted, tonal with watercolours etc. Usually grey tones, with spot colours for effect. Anything you like. Small: $150, Larger $250 See blog for previous examples.

Quick sketches are always free, certainly if in TPB's or on books in general. Signatures and chatting to you nice people are what I'm there for.

Check the FX show website for more.
Posted by Templesmith at 2:56 pm No comments:

Just got some preview copies in my hot little hands, plus just signed a whole box full of them for the special signed editions also going out soon.

Posted by Templesmith at 1:17 pm 3 comments:

Issue #1 has completely sold out from the distributor, including the quite decent overprint, so in celebration, here's a look at #3's cover.

First off, some sketchy pencils. I leave the big stuff to the inks, which is a luxury someone who does both has really.

This'll be an image of Archie in his UFO craft thing, during a dog fight with all the special US military aircraft.

Lay in the basic lines and start on the crotchwork.

Blacked in the bits I needed to, now I start on the watercolour washes...

Lots more watercolour, with a bit of white pen and such at the end before it's ready to scan... 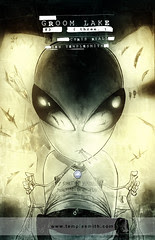 And after a few colour washes, some contrast adjustment and a little airbrush, Groom Lake #3 Cover A is born!

If you didn't know, Groom Lake #2 is still available, just ask your friendly retailer to use this code: MAR094324 to get one in for you. Otherwise it probably isn't going to magically appear on the store shelf for you. Issue #1 has already sold out so make sure you don't miss it!

Issue #3 just became available to order, so tell your retailer APR090874 is the code for the good stuff.

Cheers to everyone who bought and dug the hell out of #1! ( It apparently was quite a lot of you! )

Have just gotten word that a rather famous chap is going to be doing the intro for the eventual collection too.
Posted by Templesmith at 11:43 am 2 comments:

...to everyone who came out to see me at the Emerald City Comic-con up in Seattle over the weekend. Was again super surprised at the turnout and amazed that again I sold out of all the stuff I'd brought! A special cheers to those who got commissions. Sorry I had to knock back a few, the list filled up rather quickly! Was a great show, and I finally got to have half decent chats to a whole bunch of people, despite the fact I barely had time to leave my table the entire time.

Next con for me is in Orlando, Florida. See the side bar of my website ( www.templesmith.com ) for details of the FX show...and all my shows actually. I know a bunch of peeps read this only on blogger or various other places instead of the main site, with all it's extra info. Sadly I had to pull out of Heroes Con this year in June, due to other travel/personal commitments. Sorry guys! Next year.

Here's some commission photos as well as possibly the best Wormwood ( and Leprechaun ) costumes I've yet seen. These ones will be tough to match. Still waiting to see some strippers with the dragon tattoos walking around a con. ( I think if you tried, you may be arrested sadly! )

Posted by Templesmith at 4:51 pm 5 comments: 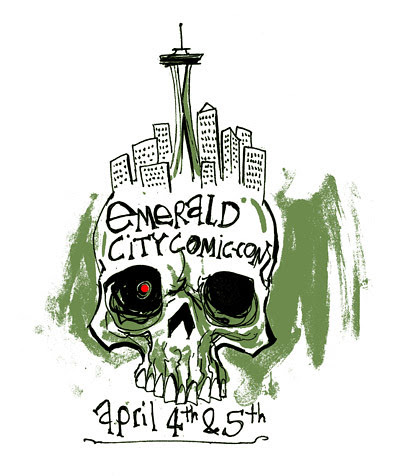 Yes indeedy, I'll be over at the Emerald City Comic-con this weekend, along with a whole slew of creators and fun peeps.

It's one of those shows I'll probably have plenty of time to actually get some commissions done, ( Which I only really can find the time for at cons sadly ) so if you want one, drop on by. I should have some books, original art & maybe some prints available too.

Here's what I usually do for commissions:

All are painted, tonal with watercolours etc. Usually grey tones, with spot colours for effect. Anything you like. Small: $150, Larger $250

Quick sketches are always free, certainly if in TPB's or on books in general. Signatures are what I'm there for.

Details for the con are:

30 Days of Night: Blood of Christ 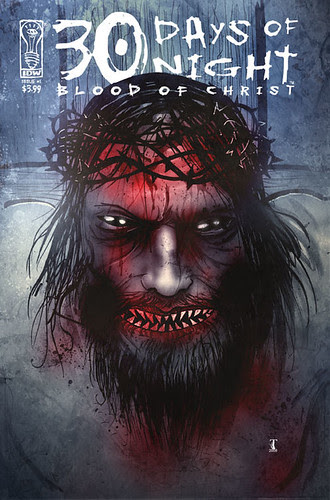 Marking my big return to the 30 Days of Night universe!


Well, no, but it was a good April Fool's gag last year. I still get random emails asking me "if it came out" or "can I help them find it as they've had no luck" etc. Sadly no, this was and always will remain a joke I just mocked up a cover for.
Posted by Templesmith at 9:34 am 2 comments: