Got a new Govt today. 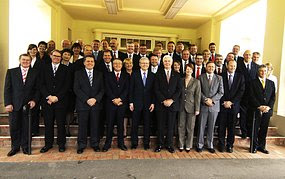 So hopefully I can stop apologizing for my country when next overseas. This one will hopefully take us into the 21st century, rather than back to the 19th like the old one did. No more denying global warming, womens and gay rights. No more clueless retard old men who think the internet is for kids and not commerce " so why would we want it faster?". No more blatant race politics, no more signing away our sovereignty to BS wars. No more deporting legal Australian citizens because they're not white. No more nutjobs trying to make public education only for the rich. No more blatant political appointments to govt bodies now made up of close friends and other cronies to the former PM. No more strangling of the Australian arts, film and tv funding...

Yeah, I could go on. Truth is these guys will probably be almost as bad as the last ones. Almost.

Within this group of new ministers, you have an openly gay lesbian Chinese woman. A rock star from Midnight Oil. A guy from our special forces, the SAS who can kill you just by looking in your direction, a TV journalist who defeated the Prime Minister in his own seat, a woman who's the youngest member of Parliament at 30 and the rest of the usual riff raff of 50 something old white men and women.

It's going to be odd not being angry and annoyed at the people in charge. Well, for at least the first 5 minutes before these ones stuff it up too.
Posted by Templesmith at 8:56 pm

Yeah, the Labour party sure won't be embarrassing overseas, will they? You cheap hack. Ashley Wood voted for Liberals. Lets give all the scum their govt benefits so that they can buy Wormwood Corpse.

Just because you have worked with Ellis don't mean you have a brain. After all, you endorse that waste of sperm and eggs, Shane McCarthy (whilst privately loathing him).

I would make up some insult about some of your work, but as I make it a habit never to read bad Ashley Wood homages, I don't really know much about it. Except that you both cannot draw hands ( or human anatomy under all the fancy effects).