From the studio tonight.

The inking stage. Using line weights a bit this time! Pencil tones and watercolour to go. Will probably put up the plain line work if anyone wants to have fun with colour themselves after I finish my Wolverine image too. Though this one needs a lot more shading to work I think. 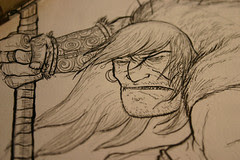 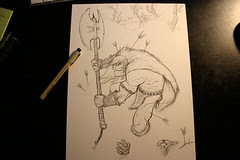 Cheers big time to everyone who took a stab at the Wolverine. Soon as I finish that one I'll blog a bunch of the ones people sent me! ( Or you can check out the flickr entries, the deviant art entries and the livejournal entries as they are. )

Got to do a big entry shortly too. Got CHOKER goodness coming your way soonish, not to mention a bit of BARONESS and I'll be all over the globe shortly, being in Brazil early next month as well as the UK in late October for MCM Expo as well as the Leeds Thought Bubble Festival in November and a few other signings around the place. 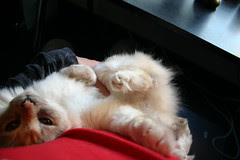 Deadlines? What are these deadline things? Shut up and rub my tummy damn you.
Posted by Templesmith at 3:40 am

Cool to hear that you'll be at Thought Bubble,i'll have to swing by and say ello!