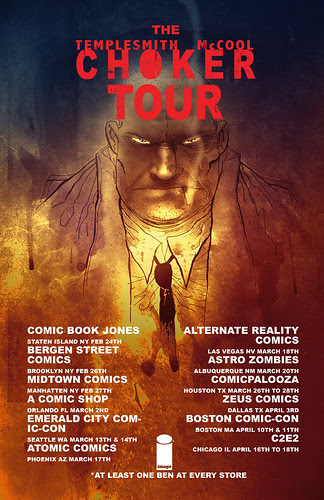 Long story short, if you have a copy right now, you kinda technically shouldn't. If you do, the Almighty Space Squid has truly favoured you basically. They could be collectors items?

However, you might notice, it's a bit wrinkly and...odd. The book,at first coming out on the 10th, then being pushed back to the 24th, then ended up looking like it was actually going to happen on the 10th ( the book was done plenty in advance! ) but as luck would have it, a problem at the printer meant a bad water/ink mix, thus the copies looked a bit crappy and Image wisely decided to have them pulped and a reprint was in order. That was going to push it back a further week...but since the 24th ( 2 weeks ) was already on the cards, it's simply gone back to that date! Thing is, some copies already made it out there, though all parties have been advised to ditch the dud copies and wait for replacements, as I understand it. The *REAL* copies have been pushed back to the 24th, it's official release date. With a little luck and a few offerings to The Great Space Squid, shiny nice new proper copies will be on the shelf and in hot little hands by then.

Still not sure if it's going to be worth it? Here's a bunch of early reviews, from people who already managed to get a copy. I tried finding a bad one, honest. If you do, let me know. Fairs fair, all opinions are valid:

"I was delighted to find that not only was Templesmith's work on Choker #1 supremely satisfying, but McCool's characters wrapped their fingers around me so tightly that, excuse the pun, I thought I'd choke."

"McCool has a serious talent for keeping you on the edge of your seat and entertained, and Templesmith’s art will blow your mind all over the insides of your skull."
Posted by Templesmith at 12:45 am

Can't wait to get a copy. Hopefully soon...