Cheers for coming out...

...to both London MCM & Heroescon both. Had great times & met many great people. ( The one word I will always officially use for the South now is FRIENDLY. Even the airport security folks were nice. )

Huge thanks to all who grabbed a copy of SQUIDGIRLS at both cons. The book's net release will be delayed a tad, but should have a bunch at SDCC. Was amazed at the number of commissions I had to turn down. Sorry! Just got too busy and can only fit so many in.

To see what we all got up to at Heroescon ( one of the nicest most friendly and well run cons I've been to, props to Shelton, Dustin and also Doug "The Enabler", ) check out Molly McIsaac's photos on flickr here. Yes, I paid her to document some of the madness. ( Not to mention a great assistant to both McCool & I with lifesaving coffee runs. ) Some fantastic photos there so go have a look. She's available to take pics of pro's and cosplayers alike. I'll be using some of these in "Scenes from the Road" later no doubt...when I actually catch up to which con is which. 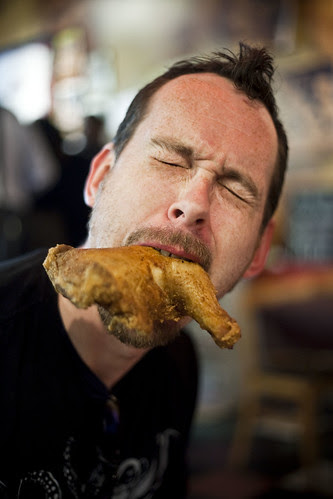 Posted by Templesmith at 8:06 pm