Nope, not to the upcoming big illustrated novel of it, but a little foretaste of it. One of those "do your own covers" which I really get a kick out of. Just so nice to do a random illo on an actual book sometimes. Great to take a break on from the pressures of the regular work. 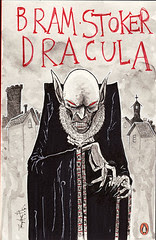 Here's basically how it went, from start to finish. If you like the end result, I put the final book up on ebay. I dig doing these book things but have no desire to just keep it to myself. Figure there's someone out there who'd probably like a Drac cover by me so... see the listing here.

Inking with a fine artline pen. A 0.1 basically.

Filling in the blacks. When in doubt, black it out.

a bit of black watercolour. Some drips for the background. General washy-ness.

Finally a dash of red for the eyes and title.

And another little doodle in the front of the book just because.

Sweet Ben! I usually go through about 40 sketches before I can commit to finishing any of my pieces.

BTW, got my autographed copy of Wormwood yesterday. The ladies are knocking themselves over to talk to me today!

A big ciao from Italy,
I hope you remember me ;)