Hello happy campers! ( Who the hell uses that turn of phrase anymore by the way?...damn, now I used the word "hell", the christo-facists at "websense" will list my site as "tasteless" again no doubt. Such is life! ) 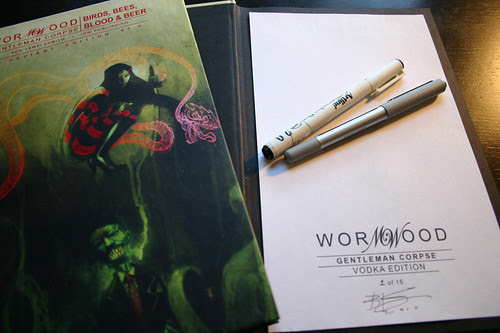 This weekend, well, from Friday really...is C2E2. It promises to be a big convention up Chicago way. I will be there. One of their guests of honour you see. Which is horribly, horribly nice of them. I will be doing many things at C2E2. A list of which, if you want to catch me, should be below.

But first, what I'll have with me, should anyone want to come by my table in Artist Alley, ( Just look for the red banner with the "T" logo ) for a chat, a fist fight or creepy hugs from strangers?

YES, I am indeed doing some at the con. First come first served really. The list starts on friday. I can usually get through 6-8 in a weekend.

Letter sized commissions: $150 11x17 are $250 And small card sized ones ( Good for headshots! ) are $40. If you've got a book I did, quick sketches in em are absolutely free. So are signatures, obviously.

Yes, will have a bunch with me. Including a limited edition SQUIDGIRLS prelude print. All prints are with archival ink on 310gsm Hahnemuhle fine art paper. All are $30.

I'll have a bunch. From Wormwood, Choker and some of my covers basically.

Will have a bunch of books with me. All retail price. Including...

WORMWOOD VOLUME 01 HARDCOVERS. A special signed, numbered and painted sketch "VODKA EDITION" to go with the "TEQUILA" edition from SDCC 2009. This one is literally limited to 15 copies. The Tequila edition was me running down my comps. The Vodka edition is literally the last copies I could buy off IDW of their stock left. Pretty much, this book will be extinct after this, short of random copies you can track down perhaps in existing stores.

Thus, Wormwood:VODKA EDITION! 15 copies only. $50 each. An original Wormwood or related painting in each one. First come first served.

So, here's where I'll be throughout the convention. Any time I'm not signing or doing panels for anyone else, I'll be in ARTIST ALLEY, BOOTH R-3, drawing and signing. Yes, all caps because I'm going to get asked this o twitterabout 50 times I bet. Heh. Come say hi, have a chat and see some art!


Signing at my booth the whole day. I think. Yay!