New Project: BLACK SKY- What I showed at C2E2 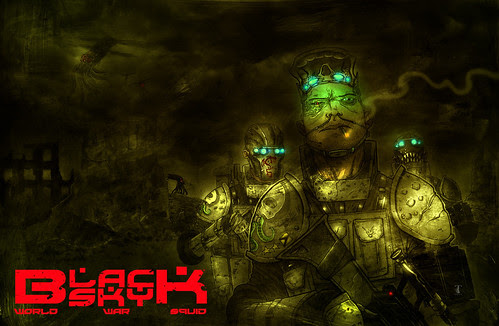 C2E2 was a fantastic convention for me. While there, at the Halo-8 panel, I showed off the first image from a new project I'll be doing with them later this year. An "Illustrated Film" the goal of which, is to meld the cinematic storytelling style of comics with good audio/voice acting & some animation/CGI in places. A fusion of many things, and dedicated to the medium itself, rather than an adaptation, which most things "motion comics" actually are currently. It's going to be an interesting ride and Matt Pizzolo, F.J. DeSanto and gang at Halo-8 are giving me a fantastic chance to explore the new dynamics opening up in storytelling media.

And yes, there will be a comic book form of this also, in print. But that's a secondary production so will basically be an adaptation of what the original project will be. So in many ways the comic will probably have to have different/extra content. I find the whole idea of this process facinating.

No release date yet, just a commitment to start on this thing in the second half of the year, once CHOKER ( with writer Ben McCool ) is fully completed.

So what is BLACK SKY? So far, all I can say is sort of Band Of Brothers...but with SQUID. ( Well, Cthulhu-ish ideas and my love of all things tentactular ) Yes, it's a war comic. Want to get all emotional and down and dirty with it. Not exactly comedy in the vein of Wormwood... It's post apocalyptic. I deals with a small group of soldiers, as the human race is reduced to relatively low tech solutions to claw back their planet, the new religion that drives them on to this goal in the face of hopelessness...and all the stuff that comes from such things. Many horrific and hopefully, some touching "tales from the front" in many ways. And of course, they'll end up being players in a major event that may define the now generations long conflict. Lots of action but with an actual point to it I hope, rather than an excuse to simply draw "cool" things.

Humans are such fragile things.

Squid, not so much.

Had an utterly fantastic time, was always kept busy. I will be back.

Onwards to new things!
Posted by Templesmith at 1:13 pm

That's a hell lotta good news to swallow man! So glad to see how active you are.