Sort of started off shit, & decided to stay that way for much of the year. Between being T-boned & being incredibly lucky to walk away with just really bad bruising, missing out on an international acting role in an advertising campaign playing *myself*, divorce, finances being all locked up, lost cats, losing pets for good, complete loss of privacy on some correspondences, temporary paralysis ( *thankfully* temporary! ), having people threaten to sue me ( Nothing real that couldn't have been defended easily enough but who needs the headache ) generally arsing up my deadlines and plans because of the other things and crazy stuff like a mentally unstable fan type claiming the last 8 years of my life have all been a sham & about ulterior motives... yeah, it was fun. You certainly find out a lot about yourself. 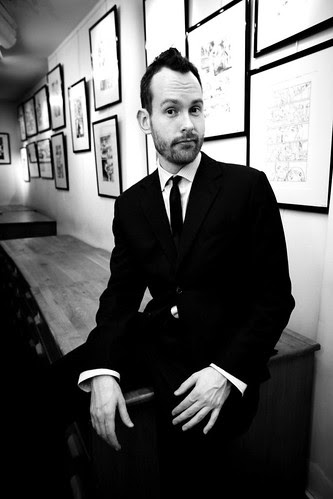 But there was some good stuff too... I did get asked to be part of a campaign, as myself, to flog a cellphone of some kind, even if I couldn't do it due to US visa travel restrictions...I should really add that to the "good" column. WORMWOOD was basically the biggest thing on the Sony PSP on the comics front for the longest time, constantly being in the top ten and at times being number 1. CHOKER did amazingly well ( and will eventually be finished, I'm currently waiting on the final script and the second last issue is about to hit stores ) I self published my first art book, Squidgirls, I stood on the shore of the Arctic Ocean, where my career began at a place called Barrow, I got to travel to so many places, like the UK, Spain, France and had my first ( hopefully not last ) real exhibition, in Paris. And I met a girl named Molly, whom I'd met a few times before and fiiinally decided to remember... I also met some amazing new friends, & learned the value of some older ones, so there's that too. And of course, I owe a huge thanks to fans and new readers alike who picked up anything I did last year. Cheers guys.

Slowly getting back to the work, hopefully under control soon. ( Yes, I know I've been horrible at getting back to people and getting on top of things, ) As with the rest of life. I always bite off more than I can chew ( or draw ) ....and a lot of interesting things are planned this year More travel is planned for this year, with conventions and festivals in Australia ( where I am right now ), the UK, Poland and obviously, around the US, though not as many as last year at this point. Moving to an entirely new city and new life in the US and if I don't like that, well, being a hermit on the side of a mountain in NZ or Tasmania sounds good too.
So come on 2011. Show me your worst. 2010 didn't break me, so let's see what you've got.

Art and stuff on the blog again soon, oh yes. ( And that pic? It's from my French gallery Exhibition at Gallery Maghen )
Posted by Templesmith at 4:16 am

Templesmith... you are an absolute idol! That is all I can say. And its sad that you got dished out a terror of a year, but I like you're always looking for the positives~~

And I am pleading that the list of Australian conventions you are going to includes either Melbourne Supanova or Armageddon. Because I would love to meet you, I did have a friend go to comic con, but she couldn't find your table cause she was too destracted by all the doctor who and starwars merchandise.