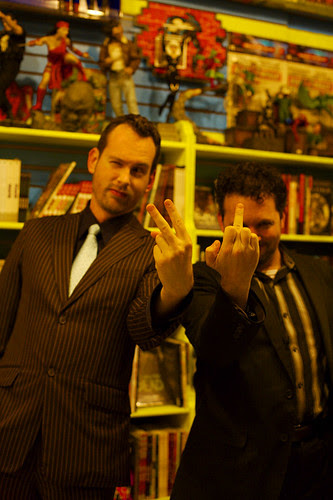 With a message to someone, about something, courtesy of Aaron Munter's camera at the Comic Outpost signing.

Was a great little signing, followed by alcohol and good food. APE, earlier in the day was also cool. Cheers to everyone who came out to see me ( And Darick ) at both.

Isotope after party was also cool. Together, James Sime and I are apparently going to change the face of comics. Namely, people will start wearing decent suits. Personally, I'll settle for at least some pros turning up to cons wearing pants. The one thing about SoCal you'll find is that everyone dressed to go out like they just woke up.

Currently at San Francisco airport. ( One of the coolest little cities on the planet ) Many more photos from a bunch of stuff to come. Just been busy. Miss sleeping in my own bed. Being on the road for virtually a month after agreeing to do far too many conventions across the globe. Love them all but sometimes it's nice to have a weekend at home.

Besides, it's not like I have about 5 comics and 3 art books to finish.
Posted by Templesmith at 4:57 pm