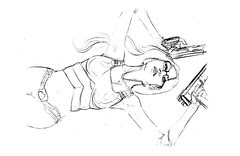 Come February, there should be a GI Joe Baroness One-shot out from IDW Publishing. I'm drawing it! ( No not a movie one, from the comics stuff, which I obviously much prefer ) Finally got the ok so I don't feel naughty showing a bit of how the cover ( or one of them ) went...

Started off with a basic line drawing I did up, regular size so I can get more of a handle on it. I then blew it up & transposed it to a large toned sheet of Reeves paper.

Lots of painting. Ink, acrylic, some charcoal too I think . I kinda forgot to take many photos during this whole part of the process. Sorry! Here it is, basically finished before the computer work. 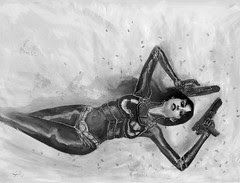 I wrote a comment for this one twice already actually, but it's been failing to load so I keep losing it.

Suffice to say, here's the basic scan, just with a little hint of a photo mouth and nose ( from a bunch I keep on file ) plus a little airbrushing to flesh out and add a little realism to the faces. I do that often. 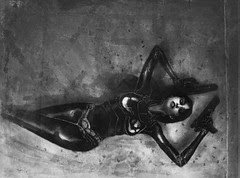 Next up I just go about darkening and lighting the image via some dodge and burn. Apart from anything it brings out the natural painty texture stuff I have going on in the original. I also drop an overlay of an old photo I took of a concrete floor, since I like the crack lines it has. 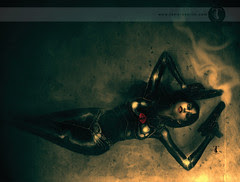 This was my first final in colours. I work tonally pretty much, and blend everything in in stages. Kind of a big fan of coloured lighting that gives hues to everything.

Only, uh, problem was...I accidentally saved over the image as a jpeg only. Not really the best if you want to go to print...so I had to redo it...in the next image. This one is lost to the ether! 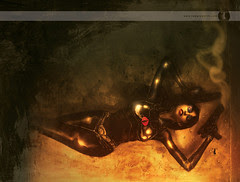 The err..."final" final... I couldn't replicate the initial colours I cam up with...but I don't mind this one either. A bit warmer, probably stand out on a shelf a little more perhaps.
Posted by Templesmith at 4:13 pm

The final of the piece really has a nice sense of depth & shadow. It's been great to watch your work improve over the years man.
-JP

So long as I'm improving and not going backwards! ( much )

Yeah. Improving. The 3 steps back, 1 forward method eh? I know all about that one!

Well.. without pointing out the obvious too much, you seem to work on self-directed (and not to forget, creator-owned) projects without much editorialisation. So, even if your art was static, having a modicum of creative freedom certainly must make the long work hours & frequent travel seem justified.

Sharon & myself have been attempting to work on projects while on our trip abroad. Much more difficult than anticipated. Then again, we've generally been living in the basement and lounge's of friends and relatives. Hardly a conducive creative environment! :D

Thanks for sharing your process & progress though. It is appreciated.
-JP

Yeah, was just talking about that today with someone actually. Most of my work is self directed/self generated and that's probably the way it'll always stay apart from the odd interesting job.