At last, no more blog entries with "back" in them.

As you may have heard, apart from Wormwood currently I'm involved with a little comic from Image ( And Electronic Arts ) called DEADSPACE, with future booker prize winner, Antony Johnston, as a prelude the new EA new game launching later this year.

For me, it's sorta "the The Thing" in space. At least with some of the visuals, which is what made me jump on board, since I'm a sucker for that.

Infact, I'll be a guest up at Wondercon this weekend ( leaving tomorrow ) thanks to EA, so perhaps I'll see some of you there, either at the Image/EA area or hovering around the IDW Publishing booth whenever I'm free. Happy to sign books, do quick sketches, yap about just how intoxicated I am and how it is I can still stand up at the con.

Anyways, DEADSPACE ( 1 of 6 ). First issue should be out mid-march. 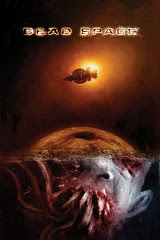 Real Space. Real Terror.
From the creative minds at video game colossus Electronic Arts comes Dead Space, an all-new horror series set in the terrifying reaches of outer space. Illustrated by top-tier talent BEN TEMPLESMITH (30 Days of Night), and written by ANTONY JOHNSTON (Wasteland), DEAD SPACE tells the gut-wrenching tale of a deep space mining colony that unexpectedly pulls an ancient and vicious alien life force from the dark rock. DEAD SPACE will be the prequel to EA's upcoming survival horror game of the same name, due in 2008.
Posted by Templesmith at 1:39 pm