Just learned that I've been nominated for the International Horror Guild Award in the Illustrated Narrative section...not once, but kinda...twice. Freaky stuff! For Wormwood and a short I did in an Anthology ( Put together via Heidi MacDonald yay! )

It's always nice to get nominations ( but of course, I'll never actually win! ) but especially nice this time to get a nod for my writing, on Wormwood, which has never happened before. Someone out there apparently likes me, so many, many thanks. 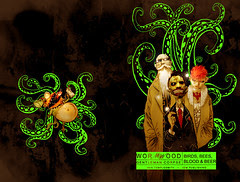 Posted by Templesmith at 7:44 pm

What is up man.
I not made it! Can send you an e-mail with a cover art that I made, I was wonder if you will apreciate. Damn my inglish.
I realy like Wormwood, you colors are the best, you put life in the fucking thing.
And congratulations for the nomination!
I post medusa on my blog, if you wana give a litle look, just a flash look, and, how knows, a comentary? UHmmm, ok, farewell!

I would look man but you've made your blogger profile private so I can't fnd your blog!

Congrats, bud!!!! BTW, I empathize with LAX. What a MISERABLE experience!