One of the Baroness images I did up for the one-shot from IDW coming out in February. No idea if this is a regular cover or not. There's like ten covers to the book and I only did two.

This here's the pencils! Took it from a pose of a lady leaning on something which I uh, turned into a chick in lather holding lots of guns. What can I say. Chicks 'n guns eh?

Did all the basic line work with a micron or a Uni-ball pen, or both. Just started filling in the blacks here.

This was all done on an 11x17 inch bristol board, white. Planned on lots of watercolour on this piece.

Filling in more blacks. A bit of a bugger considering her costume.

Lots more water colour and even a splash of red for the Cobra logo. Everything is generally just tonal greys though, since the real colour happens on computer. Just thought it'd be nice for the actual original piece.

If you dig it, it should actually be for sale sometime soon over in my section on www.splashpage, my art agent bloke, Mark Hay, who handles all my work for hire stuff. Drop him a line via the site if you're into the Baroness as he should be getting all the pages/covers I did for the book in his hot little hands sometime soooooon. ( I promise, Mark! ) 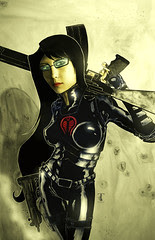 Almost finished. Just some standard tones, some dodge and burn and faded a bit of photo nose with airbrushing on the face. BUT, I was told the eyes were a little too asian ( the original photo, the lady *was* Japanese...so... 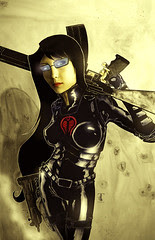 ...I rejig the colour, add in some slightly different eyes. This one goes down much better.
Posted by Templesmith at 4:42 pm

Thanks for posting this Ben, always enjoy the process posts.

always nice to see how you start and finish your work