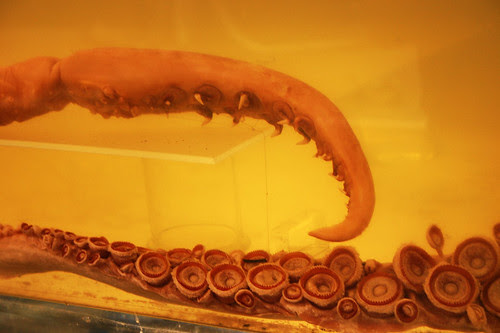 Yes, if you've ever read Wormwood: Gentleman Corpse or a few other books I've been involved with, you might guess I'm into squids a bit.

One of the photos I took while visiting the Darwin Center ( you know, that bloke religious bigots who deny science like to hate? ) Well, they have delightful specimens like a rather large Giant Squid and now a baby Colossal Squid in the same tank, so you can see the difference.

Basically, the Colossal, apart from apparently growing much larger, has bloody great claws/hooks on it's 2 longest tentacles. The Giant just has suckers. This to me, is a little bit scary and possibly the most awesome creature on the planet. Sure beats the fuck out of a Panda.

I'll put up way more images of my trip to the museum and the UK in general soon. Have been laid low with a virus upon returning from the UK. Everything is chaos right now.
Posted by Templesmith at 5:45 pm

you should come to Greece for some calamari, yes? :0

This is awesome. I had no idea they had such evil looking claws in the larger tentacles. There are some really wild underrated creatures on this planet. I just saw some GIANT jellyfish school off of Japan and they look like they are from the Oceans of Titan.

Hi! Where is that Darwin Center exactly? I want to see those squids too!