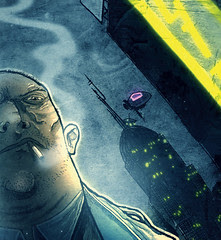 As Bleeding Cool points out, next February...is actually CHEBRUARY. It's impossible to ignore, what with CHEW, CHASE VARIANT and CHOKER all coming out from Image Comics that month. It's going to be...err...chinsane?


And next up, yup, it's been officially announced I'll be down to Heroes Con in June next year. Never been but the organizers are as nice as pie. ( A really nice pie, one your nan might make that's extra tastey, with cream on it even, if that's the sort of thing you're into...you get the idea. )
Posted by Templesmith at 8:56 pm

Looking forward to the chmonth (?). Can't wait for Choker!