So tonight instead of a bit of food and a movie, we got T-boned, along with another car, by an SUV driver who ran a red light. ( luckily there were multiple witnesses. ) No major injuries ( that we are aware of ) just a couple bruises and aches probably tomorrow. Could have been a lot worse really. A LOT worse. I/we could be dead. Quite happy to be alive. Not everyone gets to be when SUV's ( or moron-mobiles as I call them because *most* people don't actually need them except for "status" or inadequate genital size, ) run red lights...

Here's some rather bad pictures that don't really show the full extent, but no corner of the car is left undamaged and luckily, a mini cooper is made of strong stuff, with the airbags and other safety features doing everything they should have done. Never been happier owning a decent made vehicle compared to the cheapy crap...definitely paid off. Always been mindful of the features on the mini so rather chuffed at that. Weirdly, none of the windows were even smashed, just a spider pattern on the windscreen.

Further proof I guess, that living in car dependent cities indeed sucks for so many reasons! Cities with functional public transport look better by the day, when you consider the probabilities on car accidents vs bus/train/plane stuff really. At least to me. Kinda miss the UK/Australia now for yet another reason.

Oh, and for the religious among you, the One True God, the Giant Space Squid definitely saved my life. All the tea and brownies paid off. Obviously, my religion is now validated. 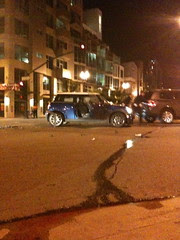 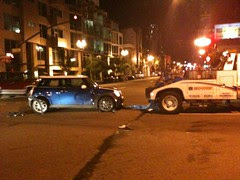 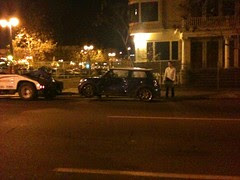 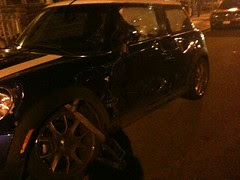 Posted by Templesmith at 9:39 pm

I'm so sorry you had to experience that, Ben!
And I'm glad you and your party emerged (relatively) unscathed.

Christ! ... Or should I say "Squid!"?
Regardless, thankfully you and your passenger(s) are alive and well-off!

You know, San Francisco has an excellent public transportation system and is very welcoming of new religions. SF is also fond of weirdo foreigners. Just sayin'.

holy duckshit fuck.
Im glad you are both ok. That shit is not cool.
Used public transport for a combined 3 hours yesterday. Lo and behold - No accidents.

All hail the Mighty SquidGod! I am very happy you're relatively unscathed. I agree with you about the SUV's and people who feel the "need" to own them...ridiculous.

Praise be to the Giant Space Squid. And holy smokes, maybe I should swap the Versa for a Mini. Are they bigger on the inside too?

Wow...glad everyone came out of that relatively unscathed. And amen to the awesomeness of public transit that works. >.>

I'm formulating a theory that someone's trying to pick off creative types, since there seems to be a small rash of authors/illustrators/musicians suffering car accidents lately. O_o Maybe sacrifice some extra brownies, just in case.