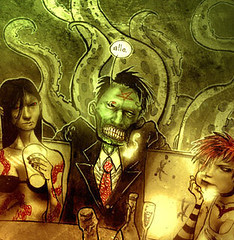 Well, I didn't see this coming but as of right now, my wee little book Wormwood: Gentleman Corpse is the number one comic on the new Sony PSP Comics thing. Both on the UK store *and* the US store. These are stores that have all the usual big, licensed properties too, you know, Marvel stuff, 2000ad and what not.

So consider me blown away. Cheers to anyone who bought it!

Got sent these via some twitter followers who also broke the news to me...see, proof! 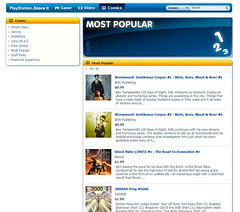 Mind you, I owe huge props to the UK PSP guys who are doing the whole operation as they've really been promoting the book on site too. Pretty much more promo than the book usually ever gets apart from my rantings. Hopefully, the price point remains 0.99 cents US, and the special #0 one-shot issue ( The TASTER as it's even called ) will be made available for FREE to further entice those of you not yet familiar with the books to give it a stab. I have been informed though, that SEGUE TO DESTRUCTION doesn't meet the legalesey content requirements ( Something to do with the Pope masturbating to young boy-love magazines, who knew? ) so that issue will probably never be up, alas.Understandable though.

Is it huge news that indy books can have such success in an online format vs the known "staples" of the comic world? I'm not sure. I have no idea of the figures behind the actual rankings etc though I'd be keen to know. I'd guess numbers are still relatively small at this point.

And yes, here's the obligatory links to WORMWOOD:BIRDS BEES BLOOD AND BEER and the next arc, WORMWOOD: IT ONLY HURTS WHEN I PEE is now starting to go up as well. Also, like the last arc, with some rambly audio commentary from me as something a little extra.

If you still prefer the print editions, I'm happy to say at least for now, they're in stock over at places like Amazon. Here for Volume 1 and here for volume 2. They even have a few copies of the special hardcover Deviant edition, though I know for a fact it's down to minimal copies everywhere.

I should have some sort of iPhone news sometime soon too.
Posted by Templesmith at 11:49 am