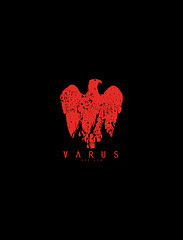 My new company. Well, my old company, I just legally changed the name late last year. I've used the corporation for over 6 years now but this year I plan on kicking it up a notch and delving into some other areas. Expect to see this logo within all my books and maybe on some other stuff!

And yes, PTY LTD is aussie. Stands for "propriety limited". Which is the same as being fully incorporated in the US. Makes things like taxes much easier.

Varus. Roman Governor. Tax collector. Bit of an old tit. Militarily, ended up being rather incompetent and failed to subdue the new roman province in Germania.

So naturally, I'll associate myself with it.

Actually, think of it more like trying to conquer new frontiers and make them financially beneficial for myself? Hmm.
Posted by Templesmith at 2:16 pm