And that's not even covering the interesting Hollywood type stuff that is potentially going on that obviously, I'm not saying anything about here.

So, probably one of the weirdest weeks of my life. ( We're going to call it a week because it's all within the space of 7 days. Hell, technically it's not over yet, shush. ) 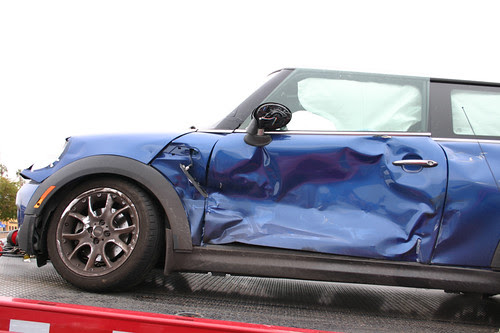 Last Saturday me and m'lady survived and walked away from an SUV running a red light, hitting us and pushing us into another lane, hitting that car too. Airbags went off, we got thrown around like lies on a Fox News TV show and all the buttons on our dashboard got popped out. First real major accident for both of us. We both have the bruises with colours you should only see when you do too much acid.

Certainly makes you happy to be alive & live to the fullest. Now more than ever I'm determined to do what I have to do. Also, I had a religious epiphany in the moments of the accident. I'll be doing artist renditions of exactly what I saw later, of what the Squid God told me, how it saved me and how I must spread his tentacled message to all those of the false religions.

We probably wouldn't have been so lucky were it not a Mini Cooper, with it's raft of glorious safety features and excellent ratings. If you get a chance, buy one. The SUV came off second best against my little tank.

Here's pictures of how it looks now, in the cold light of day. Not bad for having an SUV T-bone us and we still walk away *relatively* unscathed I'd say. 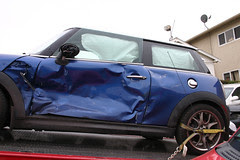 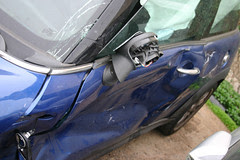 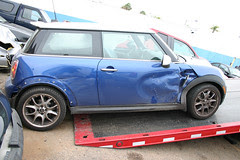 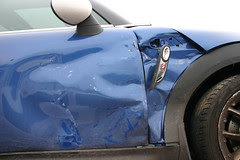 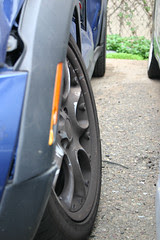 Already, dealing with insurance have come to realize the US way of doing things has apparently been invented by people who must like drinking from a chemical toilet. It makes little sense, is hugely inefficient and overly complex but hopefully, since we're most definitely not at fault, we'll not be too out of pocket. Hell, why should we be at all? A new car would be spiffy, thanks.

Not to mention what the US laughingly calls 'health care'. Even with insurance, it's more bureaucratic and costly than anything I know I'd experience back home. Should I have anything really actually wrong with me, no doubt I'll do a Barry Windsor Smith and be on the first plane home to get it fixed properly. ( Read it, it's shameful what happened. )

A couple days later I get an offer to star, *as myself*, in a US TV ad for a major corporation. Yes, they wanted to link in comics to what they were doing. Which is not only fantastic in itself but apparently I won't scare the little old ladies tooo much to exclude my mug from being a spokesman.

I had to turn it down.

Filming was outside of the US and I can't leave until some immigration stuff is processed. It nearly killed me worse than the SUV. In brighter news, hopefully someone even better gets the role and is a bit of a face for comics to the masses and more power to them. I'll have another, slightly smaller acting role in something else later this year I'm not allowed to talk about yet.

Then we get initial numbers on CHOKER #1 ( you know, that new comic I'm doing with Ben McCool...right? Riiight? ) Numbers are awesome and in the top level of what I normally do. Many many thanks to all who've ordered so far. There's still time before FOC I do believe so if you want in on one of the more interesting comics for the year, take note of the flyer below. Order code is DEC090342. I'll harp on issue #2 soon enough because you can get that now too. Retailers, if you want to see a PDF of the full first issue to see how you'd feel about #2, just ask Image and they'll sort you out right proper. (Or I can to. ) Preview of a new special retailer variant cover to the first issue below. 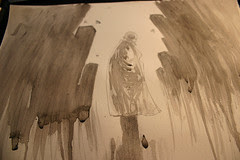 Next week, off to LA a little bit for some interesting hollywood stuff.

Oh and officially, there's no room at the inn already, our house will be completely packed with guests for San Diego Comic-con 2010! 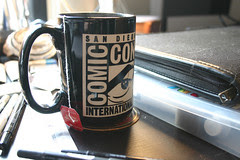 Jeebus! I'm surprised that Mini is in as good condition as it is! Glad to hear you and the lady are alright, I follow you on Twitter and I've been curious to see what the results were. I've been in one major accident before and time does seem to sort of stop.

Ok, so Mini Cooper rules. It's good to know.
One more time, glad to read you're alright. Really.

damn guys! glad u guys are ok. i knew u guys were superheroes in disguise!! new car ftw!