Officially, as in really actually probably for sure going to happen now, because David is a super dedicated nice guy. So I can spread the word ( and thus, improve my embarrassment levels as people see me flail on stage ) that this is going to take place.

6:00-7:00 Spotlight on Ben Templesmith— His evocative and downright scary art helped catapult 30 Days of Night into the major hit stratosphere. Now the vampire series is about to become a major motion picture, and the film's director, David Slade (Hard Candy), will interview Comic-Con special guest Ben Templesmith about his work. Templesmith, who has gone on to become one of comics' hottest young artists, will talk about his career and art with Slade, with special emphasis on those 30 Days that put him on the map. Room 2 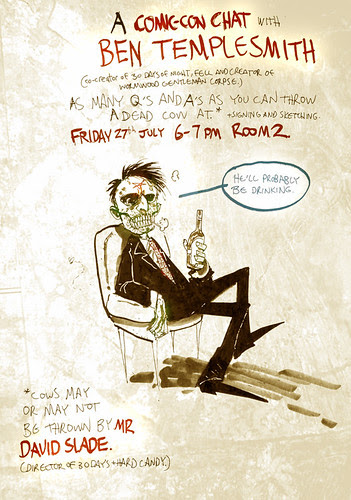 Posted by Templesmith at 4:39 pm