Inseminating women is now a fetish

This is the only think I can conclude after reading this news. I'm sure it's been making the rounds in the media already but: 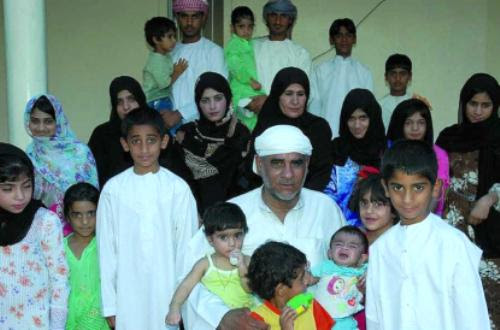 We struggle to pay the cost of living and study taxes for one or two kids (when it comes to the third, we already have an odd case) and look what a 60-years-old "daddy" with only one leg was able to do: he had 15 wives, now has 78 children (80 if the count the two on the way).

But his target in less than 10
years is to have 100 children. "In 2015 I will be 68 years old and will have 100 children," Daad Mohammed Murad Abdul Rahman told Emirates Today. "After that I will stop marrying. I have to have at least three more marriages to hit the century."
You could not even say he hurried up, as he started ‘mass producing’ children when he was 24. His youngest child is 20 days and his oldest 36 years.

His wives and ex-wives are Bedouin women from the UAE but also women from India, Pakistan, Bangladesh, Iran and Oman. He has now 15 grandchildren. "After Ramadan, I will go to Jaipur to get an artificial leg and marry a beautiful Rajasthani girl. I have had seven Indian brides.", said the retired truck driver/cop/soldier, victim of a traffic accident in which he lost his leg.

One wedding has already been arranged in Balochistan, southwestern Pakistan.

The Islam law (and that of the UAE) permits only four wives at a time, so Daad Mohammed has to divorce one whenever Cupido's poisoned arrow shoots him.

How does he manage to keep 15 households and feed so many mouths? Government support for housing and cash. Plus a military pension of $ 6,534. "Even though my family is big, I don’t have any problem managing the budget. I take care of their requirements — and pay pocket money to each and every child." said Daad. "If I buy fish for the entire family I have to spend a minimum of Dh500 ($ 136) per day. If the menu includes mutton at least Dh1,000 ($ 272) per day is required, and that’s just for the meat."

Now, apart from the probable cultural differences, where in all likelihood the "wives" have anything but a choice to marry this idiot who treats marriage and divorce like ordering at a drive thru, I have to say I agree with this one comment I read on a feedback page about the story.

"wait until he has had 99 kids and then chop it off"
Posted by Templesmith at 5:46 am